Have you ever just sat and enjoyed a cool rain on a hot summer day? Can you recall the sheer joy of running, romping, and splashing in the rain bare-footed when you were a child? How about finding that perfect mud puddle to jump in and the exhilaration of squishing the mud on the bottom between your toes? As for me, my memories are still vivid! A steady downpour is best, of course, none of that lightning and thunder and no sideways blowing storms, just a straight down refreshing shower.

I remember such a rain when I was a kid running around as I always did during the summer, barefoot and shirtless. There was a planned extension of the street I lived on and a road bed had been graded and prepared down the fairly steep hillside past the existing end of the street. It was all red clay mud with ditches excavated along both sides. There were 4 or 5 of us hooligans playing in the rain, splashing in the mud, just generally having a grand ol’ time. It was a very intense rain, coming down in big drops and so heavy it kinda looked like fog was rolling in. The ditches on both sides of the newly cut roadbed were virtually overflowing with rushing mud stained water and just looked too inviting to ignore.

I dared one of the other boys to jump in, who in turn, double dog dared me. Now, it was an indisputable fact that a double dog dare just had to be answered, so I jumped right in. I knew right away I had made a mistake as I was up to my waist in rushing water, but worst of all, I had sunk halfway to my knees in soft mud. The more I struggled to get out, the deeper I sank and the greater the suction around my legs became. I was stuck fast!

The mud was soon above my knees and the water nearly at my armpits. My buddies were laughing so hard they could barely stand and it took a lot of convincing, on my part, before they realized I was really stuck and in a bit of trouble. Finally, they began tugging on my arms and it took all of them to free me from my red clay trap. We lay on our backs in the mud, breathing heavily from the exertion, while the rain pounded upon our faces. The wheezing and coughing was soon interrupted by one of my “good friends” making a snide remark about having to pull “lard butt” out of the mud, at which time, belly-splitting laughter erupted all around. My fear was soon forgotten as I added my own shaky chuckle to the choir of cackling that surrounded me. 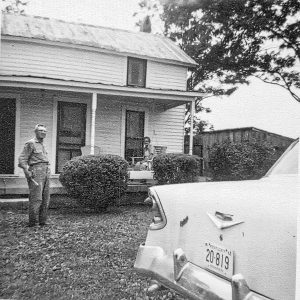 PAPA AND GRANDMA POWELL at their farmhouse. The second story window is the location of the bedroom I slept in.

I loved when it rained down at the farm. No outdoors work went on during the rain, so Papa, Grandma, and me just sat on the front porch, listening to the rain as it pounded the tin roof. Watching the rain was so pleasing to the senses as the air became so fresh, inasmuch as the rain cleansed it of all the dust, pollen and pollution. I can close my eyes and imagine that fresh, clean air smell, just like the smell of my Mama’s laundry as it hung to dry on the backyard clothesline. I wonder if she ever discovered my dirty hand and face prints on any of her clean white sheets when she took them down to fold.

Rain on a tin roof is mesmerizing, especially when you sleep in an upstairs bedroom in an old farmhouse. With no insulation and no ceiling board, the only thing between you and the rain is the roofing material, usually “one by” boards, and the tin sheeting nailed to it to repel the rain. There is no better sleep inducer than the rhythmic patter of the rain on the metal roof. As the feather bed envelops your body like a soft cloud, the rain lulls you to sleep and you drift into a most peaceful slumber. How many times, as morning’s light peeked through the window and the rooster crowed his dutiful alarm, I have awakened in exactly the same position in which I fell asleep, having been oblivious to anything but the hypnotizing rain. I have often slept so hard that my eyes were crusted shut by the “sleep” accumulating while I was as comatose as a hibernating bear. There is nothing so peaceful as the torpid slumber induced by the rhythmic drumbeat of raindrops on the tin roof.

It seems the older I get the more I realize it’s not treasures that a person has accumulated, but rather the simple pleasures of life that are most precious in our memory. It is also not the material things we hold most dear, but rather the relationships and bonds of friends and loved ones who filled our hearts with joy and laughter, many of whose earthly journey has ended.