‘These Americans deserve real tax reform.  And I urge all of my colleagues to join me in working from this framework to deliver for them. Because it’s time to take more money out of Washington’s pockets, and put more of it in the pockets of Americans.’

WASHINGTON, D.C. – Senate Majority Leader Mitch McConnell (R-KY) made the following remarks on the Senate floor regarding the need for tax reform:

“Later today, I look forward to joining members of the Senate Finance Committee, the House Ways & Means Committee, and other congressional leaders in unveiling a unified framework for fixing our nation’s broken tax code. It’s an idea that can bring much-needed relief to middle-class families and small businesses and help keep more jobs in America. It’s the result of a lot of hard work and input from Members, Committees, staffs, and the administration, to name a few — I thank them again for their continued diligence on behalf of our country. This framework is focused on supporting American jobs, on making taxes fairer and on growing families’ paychecks.

“It’s a refreshing change from our current outdated tax code, which for too long hasn’t worked for many Americans. The current code forces individuals, families, and small businesses to navigate a web of schedules, deductions, and penalties. Rates are too high.  Incentives often make little to no sense. Some actually encourage companies to ship American jobs overseas.

“Moreover, for eight years under the Obama administration, our economy grew at a sluggish rate – never living up to its real potential. Too many Americans struggled to get ahead, many living paycheck to paycheck. It’s time for a significant change in favor of families and jobs.

“This is our once-in-a-generation opportunity to fundamentally rethink our tax code. We can unleash the economy – promoting growth, attracting jobs, and improving American competitiveness in the global market. Instead of sending jobs overseas, we can modernize our tax code to help bring strong investment and good paying jobs home and keep them here. Through this framework we can lower taxes for individuals and families, so hardworking Americans are able to keep more of their hard-earned money.

“Later this afternoon, President Trump will bring our shared vision of tax reform to the people of Indiana and to Americans more broadly. He will explain his support for putting Americans across the country on a more level playing field.  Because when they are, they can win. I want to thank the president and his team for their efforts to develop this framework.  Together, we can continue that work to bring relief and growth to the people of our states – like the workers, small businesses, and families of Kentucky – and promote economic growth in America.

“Using the framework we will release today as a roadmap, the Senate Finance Committee under Chairman Hatch’s leadership will continue to hold a series of hearings to discuss how to make taxes lower, simpler, and fairer for middle class families and for small businesses. Like its counterpart in the House, the Ways and Means Committee, the Senate Finance Committee will continue working to provide much-needed relief to encourage jobs and investments to come back to the United States.

“The work of these committees will help build a stronger country. Many of our Democratic colleagues have voiced support for overhauling our tax code.  And throughout this process, I hope they will choose to work with us in a serious way.

“A fundamental overhaul of our tax code is a daunting task, and we have a lot of work ahead, but America deserves it. Like the hardworking men and women of the middle class, saving for retirement. And the small business, trying to expand and grow. And the families, hoping to send their kids to a good college. These Americans deserve real tax reform.  And I urge all of my colleagues to join me in working from this framework to deliver for them. Because here’s the point, Mr. President, it’s time to take more money out of Washington’s pockets, and put more of it in the pockets of Americans.” 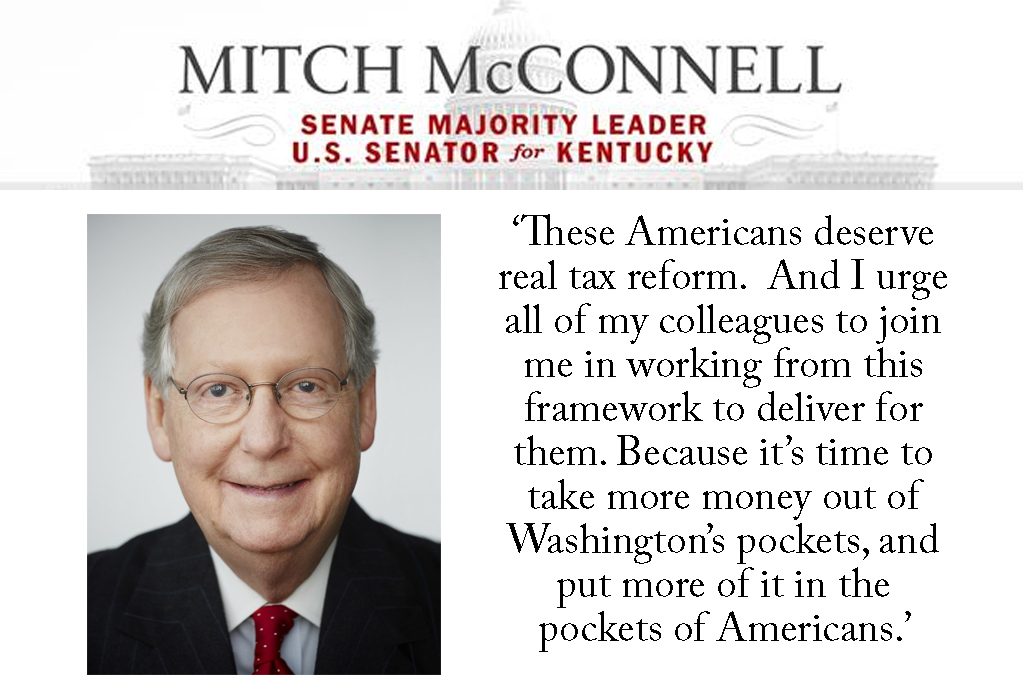