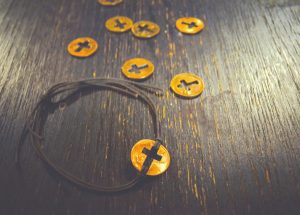 The bad news:
20.9 million people are affected globally by the second largest criminal industry in the world that rakes in approximately $32 billion.

This activity has been reported in all 50 states and targets those most vulnerable in society.

Human trafficking is not a new problem, but it is a growing one.

When we think of criminal activity around the nation and throughout the world our minds are directed to the illegal sale of drugs and weapons, but we do not often enough consider the heinous act of reducing a human being to an object that can be bought. Ripping men, women, and children from their rights and their lives and stripping away all value by slapping a price tag on the worth of their life.

The despicable heartbreaking nature of this crime should effect us. We should be disgusted; we should want to do something to put a stop to this. Slavery has left ugly stains on world history, but it is not just history. Human trafficking is referred to as modern day slavery, and rightfully so.

Human trafficking is “the exploitation of another individual for labor and or commercial sex through the use of fraud, force or coercion, making it modern day slavery (National Human Trafficking Hotline).”

It’s easy to hear the global numbers and be shocked while at the same time feel worlds away from the reach of this crime, but we are wrong to think that human trafficking is not happening here at home in Kentucky.

Since 2007 the National Human Trafficking Hotline (NHTRC) received 1,686 calls with 373 cases, and approximately 465 victims. This year alone 141 calls have been received in Kentucky.

Now, the good news:
As dark as the numbers are, we have the power to shed light on this darkness and contribute to its end.

When Savannah McGraw, a junior at Freed-Hardeman University and Ohio native (and awesome friend) heard these numbers, she knew she had to do something to fight it, so she did.

McGraw’s fight to end human trafficking began with a research paper. After choosing the topic and learning more and more of its sad truth, the need to do something settled deep within her heart, and led to the creation of her campaign, “Can’t Be Bought.”

“I started to notice how bad this really is and I wanted to do something,” said McGraw. “I decided to make bracelets and sell them. After about two months of planning I launched my campaign and released it on May 26, 2016.”

Since last year, McGraw’s bracelets have raised around $7,000 to fund efforts through Direct Connect Humanitarian Aid (DCHA) to not only rescue victims, but prevent the spread of trafficking through education to provide better job opportunities, provide rent, food, clothing, and sponsor self-defense classes.

“I came up with the name Can’t Be Bought during my research paper. I read of how they would buy these girls’ lives for maybe $80, and my mind couldn’t wrap around that, so it led to the idea for this name, because humans cannot be bought. Our souls cannot be bought. Someone may hurt you physically, but they cannot stop your soul,” said McGraw.

Not only have the funds she has raised gone to preventing trafficking and rescuing current victims, but it has also given her a platform to inform others that this is happening in our world, and it will continue until we fight it.

“This is the second largest crime industry in the world. People’s lives are being sold away, I don’t know a worse crime. That’s why it should be talked about more,” said McGraw.

She has spoken to youth groups and church camps as far as Montana, and will present her campaign to all Freed-Hardeman University students next month.

“It has been really cool to see how widespread it (Can’t Be Bought) has become. I went home and went to the movies and the guy at the window was wearing one of my bracelets. Then another time I was at my brother’s ball game and a mother and daughter were wearing them. People I didn’t know. People have been really excited to help and it is refreshing to see how good people are and they want to help, even in a small way,” said McGraw of how she has witnessed her campaign spread.

She even had the opportunity this summer to travel to Belarus through DCHA to learn more about the human trafficking around the world and how the world’s most vulnerable are at such high risks of both sex trafficking and labor trafficking.

For now Can’t Be Bought is operated by McGraw, with a lot of help from her parents and friends, but she hopes to continue her campaign in the coming years. “I hope to make this a non-profit with ambassadors and locations to help run different stations in different states, and help with the supply and manufacturing,” she said.

If you, like me, are inspired by people like Savannah McGraw who see the huge and seemingly impossible problems of the world and face them head on, there is even more great news- you can be part of the fight to end this huge and impossible problem, and it takes only starting where you are with what you have with the intent to help someone who needs your help.

To learn more about Human trafficking, websites such as Homeland Security, the National Human Trafficking Hotline (1-888-373-7888 or text 233733), the Kentucky Department of Education, the Polaris Project, and many more are filled with information to spot human trafficking as well as ways to get involved in ending it. Inform yourself of legislation to fight this horrific crime, and get involved in speaking with your legislative representatives at the local, state and federal levels to continue doing more. Get involved in your community by volunteering to help those most vulnerable and in need of help to protect them from the dangers they face.

Above all, get informed and inform others.

If you are interested in ordering bracelets ($5), feel free to e-mail me at the e-mail given above.

Always remember that the darkness has no power when we all choose light. Choose to be like Savannah McGraw and others who are shedding light on the reality of human trafficking and choose to follow the Change Reaction by doing something to bring this industry to an end!

Bracelets are designed to reflect the sentiment of “Can’t Be Bought.” The cord represents the bondage that victims suffer. The penny symbolizes the lack of worth that other humans place on the lives of those they are willing to sell. And the cross in the center is representative of the true worth in all human life and the importance of each soul in Christ.