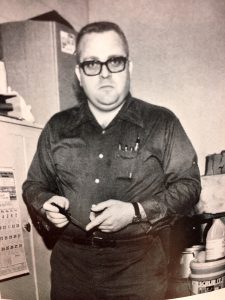 The Caverna Independent Schools community suffered a significant loss last week with the passing of Greer Atwell. Familiarly known to all by his first name, Greer was one of the most influential people at the long-gone Horse Cave Elementary School and its successor, Caverna Elementary School.

The unknowing might mistakenly think Greer was a school district administrator or a teacher. In reality, he was the beloved custodian of those schools for more than 40 years. It’s likely that he never realized that his approach to caring for the school’s physical property, the students, and teachers made him something akin to the heartbeat of the educational community.

Greer wasn’t an administrator yet he kept activities operating in a decent and orderly manner. There was little doubt that Caverna Elementary was “his” school and he cared for it and those within it as his castle and his family. He wasn’t the school counselor but he dispensed words of wisdom and encouragement to students and teachers; when needed, he also delivered reprimands that much of the time came with “the look” that took care of the matter. That look silently told you when you were in the wrong while a wink of his eye told you he was proud of you for doing things well. Greer wasn’t a teacher in a classroom but he was one of the most effective educators because of his life witness.

While filling the roles mentioned above, Greer remained the same humble spirit, shunning accolades while constantly stepping outside the spotlight to remain behind the scenes. Just as he refused honors during more than four decades of dedicated service to Caverna Schools, he rebuffed the thought of tributes in death. At his request, Greer preferred to decline a traditional funeral at which he would be the focus. Yet, the beauty of his life needs to be noted as the Caverna community grieves its loss.

Honoring Greer’s preference to forego a detailed review of his life, one can condense his story to reveal that he was, perhaps, Caverna’s most success man. How is that, you ask? Heed the timeless words of Ralph Waldo Emerson who posed the question, “What is Success?” Had they lived in the same century, Emerson could have had Greer in mind when he wrote in answer to his question:

“To laugh often and much;

“To win the respect of intelligent people and the affection of children;

“To earn the appreciation of honest critics and endure the betrayal of false friends;

“To find the best in others;

“To leave the world a bit better, whether by a healthy child, a garden patch or a redeemed social condition;

“To know even one life has breathed easier because you have lived;

“This is to have succeeded.”