On September 18, 1840 Constantine Samuel Rafinesque died in Philadelphia, 14 years after he is said to have put a curse on Transylvania University where he had been a professor of botany and natural science.

Rafinesque was born in 1783 in Galata, a suburb of Constantinople, his father a French merchant and his mother from a family of German merchants. At age 12, he began collecting plants and by age 14 had taught himself Greek and Latin so he could read footnotes in books he was reading from his grandmother’s libraries. For the most part, he was an autodidact – self-educated – in numerous fields as a zoologist, botanist, writer and polyglot. He arrived in Philadelphia at age 19 and began working in the mercantile house of the Clifford Brothers.

For two years, Rafinesque roamed through the woods and fields from Pennsylvania to Virginia, creating collections of plants and developing correspondence with other naturalists. During this time, he applied to be a part of the Lewis & Clark Expedition but was twice turned down by President Thomas Jefferson. 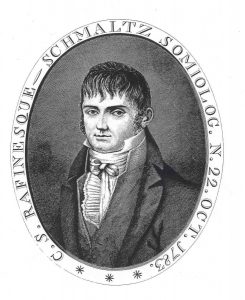 Discouraged, Rafinesque returned to Sicily in 1805. There, he was secretary to the U.S. consul while on the side he explored for plants and identifying fishes that were scientifically unrecorded. While there, he fathered two children with Josephine Vacarro, his common-law wife. After his son died in 1815, he left Josephine and returned to the United States. Reaching Long Island Sound, Rafinesque was devastated when the ship he was on wrecked, causing the loss of his collections and unpublished manuscripts.

In 1818, Rafinesque left New York on a collecting trip down the Ohio River, traveling as far as Shawneetown, Illinois. On this trip, he began the first comprehensive study of fish in the river. While in Henderson, Kentucky he stayed eight days with John James Audubon. Of that visit, the 33-year old Audubon wrote, “We had all retired to rest. Every person I imagined was in deep slumber, save myself, when of a sudden I heard a great uproar in the naturalist’s room. I got up, reached the place in a few moments, and opened the door, when, to my astonishment I saw my guest running about the room naked, holding the handle of my favourite violin, the body of which he had battered to pieces against the walls in attempting to kill the bats which had entered the open window, probably attracted by the insects flying around his candle. I stood amazed, but he continued jumping and running round and round, until he was fairly exhausted: when he begged me to procure one of the animals for him, as he felt convinced they belonged to ‘a new species.’ Although I was convinced of the contrary, I took up the bow of my demolished Cremona, and administering a smart tap to each of the bats as it came up, soon got specimens enough.”

Rafinesque apparently had better luck capturing bat specimens when he visit Mammoth Cave in south central Kentucky. There, he documented what is now known as the Rafinesque Long-eared Bat. The cave passage where he found the bats is named Rafinesque Hall in his honor.

On his way back to Philadelphia, Rafinesque stopped in Lexington, Kentucky where his former employer, John D. Clifford, was living. Clifford was a trustee of Transylvania University and arranged for Rafinesque to be employed as a professor of botany and natural science.

Throughout his tenure at Transylvania, Rafinesque was plagued by quarrels with colleagues and reputedly became the lover of Mary Austin Holley, wife the school’s president, the Rev. Horace Holley. He was known, according to Mrs. Holley, for drawing quick sketches of people at various events, one being a sketch of Lafayette during his visit to Lexington in 1825.

During his years in Kentucky, Rafinesque became interested in prehistoric Indian sites and identified 148 of them in Kentucky alone. He left Transylvania after a quarrel with Holley in the spring of 1826, allegedly putting a curse on the college, and returning to Philadelphia where he spent the rest of his life.

Rafinesque’s later years were spent living in a rented apartment in Philadelphia where he traded books and specimens, gave lectures, researched and wrote about his findings. Thanks to the patronage of a Charles Wetherhill, Rafinesque published 220 “works, pamphlets, essays, and tracts.” When he died, he left a similar number of unpublished manuscripts which were sold as junk. He had a peculiar love of devising scientific names, 6,700 in botany alone. In 1832, he became a naturalized citizen and in the same year, he became one of the first to use the term “evolution” and proposed a theory of evolution years before Charles Darwin.

Rafinesque died of stomach and liver cancer believed to have been induced by his self-medication years earlier with a mixture of maidenhair fern. He was buried in Ronaldson’s Cemetery in Philadelphia. His funeral expenses were $16, including an oak coffin, but his grave was left unmarked.

In 1919, the cemetery had fallen into disrepair when three Philadelphians located Rafinesque’s grave and placed a marker. Elizabeth Norton, the librarian at Transylvania University, learned of the activities and that Ronaldson’s Cemetery was full, neglected, in a then-undesirable location, and apt to be destroyed. Norton promoted the idea of returning Rafinesque’s remains to Transylvania and in March 1924, Transylvania dean Thomas Macartney travelled to Philadelphia and brought back some remains to be placed in a crypt beneath the steps of Old Morrison Hall at the college.

Research in the 1980’s revealed a surprising twist in Rafinesque’s saga. In the era of Rafinesque’s death and in cities where land was scarce, graves were reused multiple times resulting in layers of bodies in one space. In Rafinesque’s case, he was buried on top of two other people and in time, three more were buried on top of him. Researchers are confident that the Transylvania crypt contains the remains of Miss Mary Passimore, not Rafinesque.

Today, Ronaldson’s Cemetery no longer exists and the site is a playground in a renewed and fashionable section of the city. Meanwhile, the Transylvania crypt contains a slab inscribed, “Honor to whom honor is overdue.”