Jobe Publishing, Inc.
The events of August 30, 1922 were recalled last week on the 95th anniversary of the dedication of a monument honoring the soldiers who dies in World War I, at the time known as the Great War. American Legion Post 28 of Barren County was the original lead group in creating and erecting the memorial during the 1922 American Legion Convention being held in Louisville. 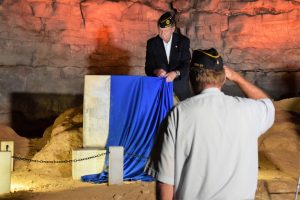 The simple, rectangular monument includes a crypt in which a list of the fallen soldiers from 35 states was originally placed along with other related papers. At the time the monument was created, organizers felt the location inside Mammoth Cave was an ideal spot for thousands of tourists to view the monument and recall the soldiers.

“The horrors of the Great War stunned the world, and the common hope was that there would never be another like it. The American Legion and American War Mothers selected Mammoth Cave as timeless place to recognize the soldiers who died during that devastating conflict,” Mammoth Cave National Park Superintendent Barclay Trimble said.

In 1929, the American War Mothers also placed a monument honoring the fallen heroes of the Great War. That monument is fashioned as a small obelisk with the organization’s insignia in bronze creating a finial. For years, the two memorials were displayed near each other and at some point, they were moved to another part of the cave where they remained for decades. No longer visible to the pub 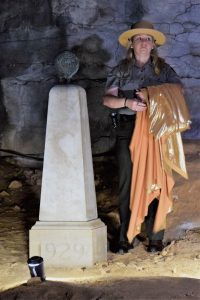 lic, they were largely forgotten as subsequent generations didn’t know of their existence.

Thanks to the determined leadership of Park Ranger Joel Gillespie, the story of the monuments was made known to key individuals and the decision was made to restore the monuments to public view. For nearly two years, MCNP employees have kept the project low-key until the memorials were once again inside the cave. According to Gillespie, the monuments were taken to the Historic Preservation Training Center where they were properly cleaned and reconditioned prior to placement. 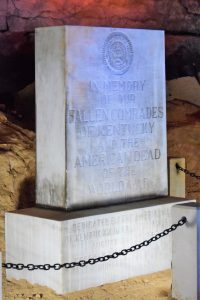 reserve them beyond sealing them in an appropriate container and returning to the crypt. Thanks to the skillful maneuvering of cranes and a legion of workers, the granite monuments are now returned to their approximate original location in the rotunda area of the cave just inside the Historic Entrance.
Last week, Billy Houchens, Adjutant of American Legion Post 28, gave brief remarks about the significance of the local post’s role in placing the monuments. Also on the program was Michael Wilson, Commander of DAV Chapter 20 of Glasgow, MCNP Superintendent Barclay Trimble, Lt. Col. Scott Walker of the Barren County High School JROTC. Highlighting the program were remarks by Gillespie whose passion for the project brought it to fruition. 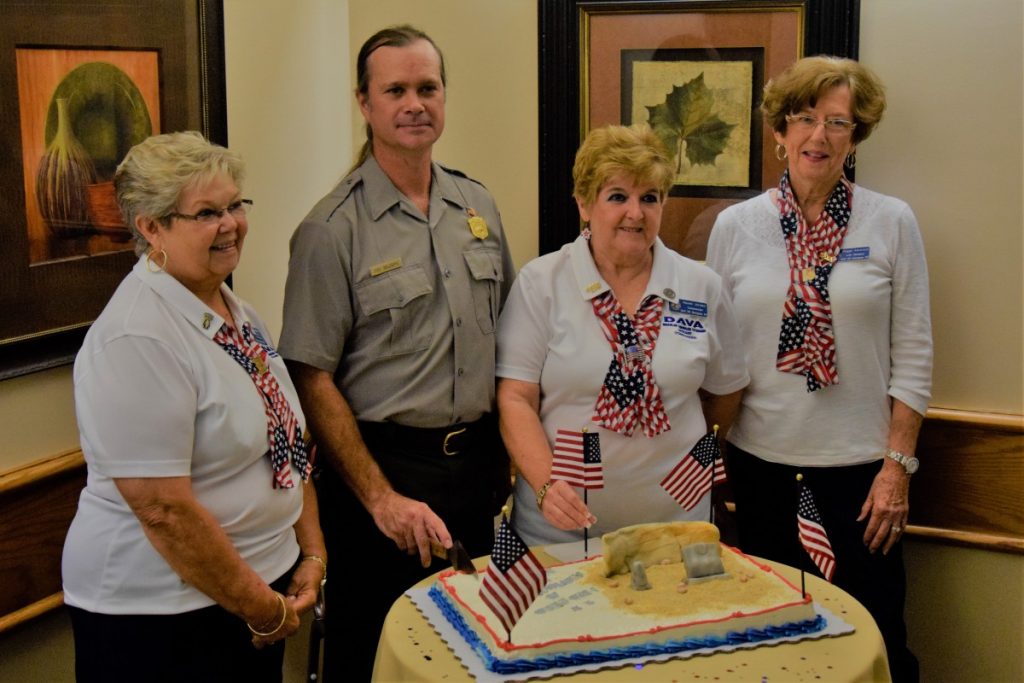 Park Ranger Joel Gillespie, second from left, is shown with DAVA members Lisa Phalen, Naomi Jordan, and Peggy Atkinson during a reception following the rededication ceremony. The DAVA commissioned a commemorative cake depicting the monuments for the occasion.

Tricia Turcotte, a Glasgow resident and MCNP employee who has helped with the project commented that, “It’s really an honor to have been a part of this, not only as a resident of Barren County but as a veteran myself. It means a lot to be able to walk down there and see that piece of history and remember so many who have the ultimate sacrifice. It’s very meaningful to bring honor back to all of those individuals.”