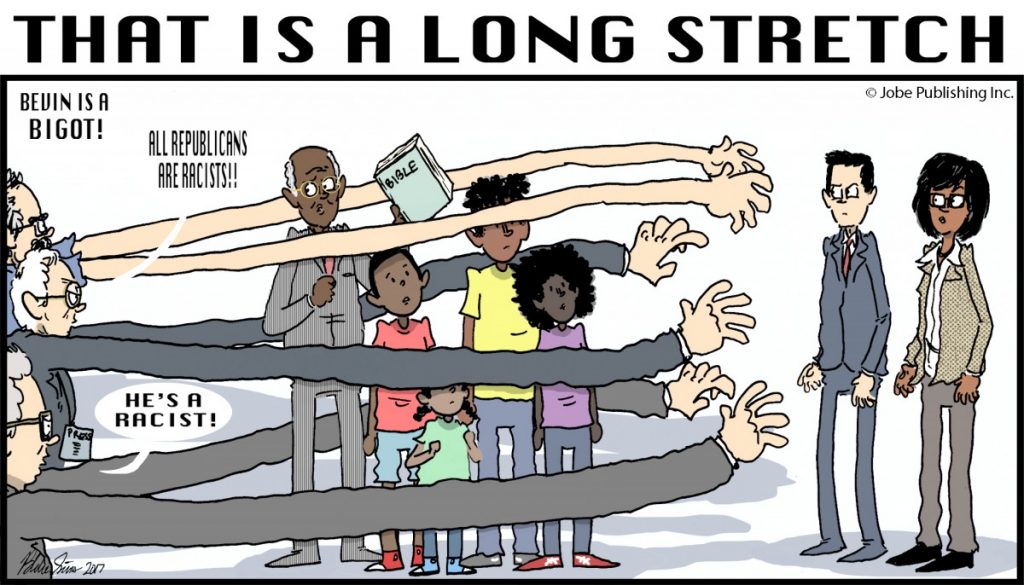 It is a big part of the political play book to look for opportunities to make states that lean red out to be racists and bigots.

The once amazingly powerful national media would start this theme and it wouldn’t be long until our own state-wide newspapers would chime in and because they were perceived as one of us; heck I remember analyzing my own upbringing.

I always fight the battles of being true to my beliefs while searching for individuals who might best honor them after Election Day. I have never cast a vote I felt may have been influenced by racism or bigotry.

I remember looking up the meaning and thinking, I don’t think I am superior to anyone and I have never had any grand idea that anyone else’s beliefs in religion positions me to pass judgment on them. My faith is very clear to witness love toward all and this is what I strive to do on my best days.

Along with this, in all my years I have never had a discussion or debate with my peers about such issues that anyone made a serious outlandish statement in these regards. It just does not happen in my circles.

Of course, those circles are out there, just as the circles of people of color who hate, distrust and work against a white person simply because of his outer layer of skin color. I remember my mother saying, “color is only skin deep” and “we are all the same inside.” Like most of her and my grandmother sayings, science always proves them right.

Without a doubt, my biggest and most memorable disagreements regarding race and bigotry are from discussions with those working inside my industry.

One of my more memorable discussions was with Ronnie Ellis of the Glasgow Daily Times. He is a strong proponent for defining the reason Kentucky voted against President Barack Obama is that we are racists. These discussions have happened numerous times over the years with him and others. I defend myself and the Kentucky I know against these theories. I remember sharing with Ellis just days after Obama’s initial win something along the line of, “perhaps this will help dispel the political spin that Americans are racist and we can talk policy needed to grow industry, create jobs and give future generations confidence that comes with being self-sufficient.”

Well, that didn’t work and from where I sit, it seems we did little more than talk about race for 8-years and even less was done to encourage tolerance of one-another and absolutely nothing regarding the policy I feel is most important.
Now here it is 2017 and our new President Donald Trump can’t get it right no matter what he says or does. These same once amazingly powerful national media dissects every speech he makes and will trash him for not using the specific words they want and when he gives in and does, they say, “it was too late.”

Once this happens Joe Gerth of the Louisville newspaper will go into action re-tweeting, or sharing tweets tying these national theories of hate and bigotry to Governor Matt Bevin while my friend Al Cross begins his specialty in reporting of splitting up Republicans.

What true Kentuckian could think we are racists? Who among us feel it is important to know where Senator Rand Paul or Congressman Jamie Comer are on the subject? I don’t care and I actually feel they should know better than to discuss a fellow Republican with Al Cross, Joe Gerth or Ronnie Ellis. Surely they know by now they are not calling to help them get the truth out. They are calling to position them against their own party or to hurt another Republican.

It’s just what they do.

I watch with amazement as they strive to take this unfounded political narrative and tie it to Kentuckians by placing our leaders in a position of speaking out and hurting the causes they know Kentucky elected them to do: grow industry, create jobs and pass along a future of self-confidence that comes from being self-sufficient to our children.

I’m absolutely tired of it. The individuals who should be defending who we are as Kentuckians are doing all they can to divide and help misrepresent us in the name of either getting a check, perhaps keeping a job or political biases.
They should be making an argument the absolute opposite for President Donald Trump with Kentuckians as the basis.

Kentuckians don’t just talk the talk, we walk the walk. The top Senator in the nation, Mitch McConnell is married to a woman of color. Governor Matt Bevin has the first woman of color as his Lt. Governor and has even opened his home, heart and family to children of color. While over in Lexington we have elected an openly gay man from Glasgow, Kentucky, Jim Gray, Mayor.

How in the world can these political pundits be taken seriously with the hard evidence staring right at them that Kentuckians are not at all a racist people.
It is a very big stretch to even try.