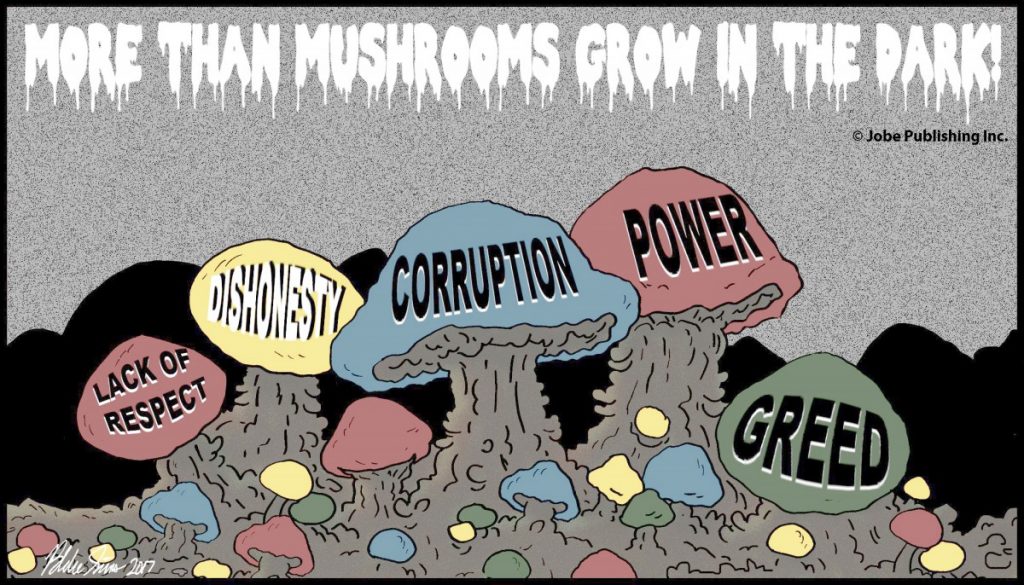 Over the years I have come to the conclusion that nobody likes being left in the dark.

As with most of my commentaries, I break down my thoughts to a simple theme, one I feel is familiar with most everyone and certainly if you grew up in Kentucky.

The expression “nobody likes being in the dark” or perhaps “only mushrooms grow in the dark” are probably recognizable to most readers.

These statements convey a certain exclusion — somebody knows something that you don’t. Far too often, that’s how many of us feel when we are dealing with government and that’s not how it is supposed to be in America. We should know who is making important decisions and how they are making them.

We’d all like to “be in the know,” or perhaps “have a seat at the table.” Just imagine the community feeling of togetherness if we all were given this respect. However, getting information is not always as straightforward or simple as intended, especially around government bureaucrats.

Over the past few weeks Danny Basil, a Glasgow attorney, was hired to identify issues that could help the Glasgow Electric Plant Board understand why they may be removed from their appointed posts. For me and the other thousands of volunteer board members across the state just a few years ago, we simply said, “if our services are no longer needed, then so be it,” and we stepped aside when we were replaced. We understood there was no guarantee, those elected are given the authority to name and replace at will, and in my case simply because I was a Republican.

But it appears the national “obstructionist” trend against our President, and our Governor has now made its way down to the lowest levels of city government.

These board members have chosen to ignore the dozens of pleas from customers who are hurting. They have all the resources at their fingertips to prove individuals on fixed incomes, the disabled, and the working class are using less energy but paying more to Glasgow EPB. While their emails confirm they were very much aware that large corporations were using more and saving hundreds of thousands of dollars. Yet, they joined Superintendent Billy Ray in an attempt to discredit those speaking out instead of fixing the problem. This is where they lost the trust and confidence of those who needed them most.

They have even discounted both the city attorney and the Attorney General’s opinion that they can legally be removed. This fact seems to be lost in the ludicrous threat of legal action.

One would think they would already know what it is that has put them in the position of having potentially lost the confidence of this council and without a doubt the more than 1700-strong social media group. But if not, I say give them their day in open meeting to explain it and by all means allow them to defend themselves.

Simply put, they are allowing a program to not only hurt our own community but because it’s success is being exaggerated and failures hidden, other communities will be hurt. Kentucky families have been exposed to enough untested programs and we owe it to our fellow man to be honest in the assessment of this one.

Since my last commentary, I have read the findings by Basil and his recommendations or “agreement he made” and provided city council.

He referenced open meeting laws which I have dealt with for almost 30 years. These laws simply define how no government business discussion is to be held outside open meetings. This includes the beautiful commentary or persuasive details that have been emailed for years to the GEPB board members prior to a meeting. This clearly violates the law in regards to no discussion whatsoever!

Basil was correct in his assumption of it not being lawful, and his personal acceptance of their past transgressions is fine and his compliments for them agreeing to post future pre-meeting information on an open GEPB-administered website is a grand thought as well. However, this is not the law. They broke it, and rather than say they will stop breaking the law they seem to have agreed to amend the law and I’m comfortable few among us feel allowing the GEPB to establish their own procedure is in the best interest of Glasgow.

Kentucky legislators realize not all Kentucky residents have access to Internet and one would think GEPB would be in a wonderful vantage point to know this as well. Unless, of course, there is to be free internet service in the future.

I remember reading an email in which Ray communicates to his board again along with commentary to permit him to be removed from the $20,000 procurement cap. Perhaps Basil was satisfied with the explanation of this and witnessed the documents himself that proved it didn’t actually happen but without the hearing or documents proving it; then council and the community is still in the dark.

Procurement is a very important issue in government. After all, most deals with tax dollars and even here with the GEPB, these funds were reported to have been commingled with all other funds of the GEPB.

There is no denying this board has allowed commingling of funds from the electric service to prop up the cable end by covering some $2.4M in losses. Profits that under law were never to be used for anything other than providing low electric energy costs. It seems Basil has accepted the TVA telling him they do it elsewhere as some proof of legality. To me, it says perhaps this law is being broken elsewhere as well.

Citizens want to know how their money is used and what government is intending to buy. Contracts need bidders to insure the broadest cross-section of businesses have the opportunity to bid on government contracts and the most efficient means is given in providing services. Governor Matt Bevin and our legislature just fought and passed legislation removing unfair business practices to help our local businesses compete and here we find we are doing it to ourselves.

Without a doubt, no company who performed work for the $7.4M SET Program or a single family who had the opportunity to participate in some form of energy savings upgrades have done anything wrong whatsoever. The only hints of guilt come from the anger and deception we have had to deal with in trying to detail this process.

It is not the job of a business owner to ask, “did you post these bids in accordance with the law” any more than a home owner should ask “did you give me the same opportunity for upgrades as you did yourself.” We elect 12 council people and a mayor to make sure boards are appointed to honor our laws and if this council and mayor chooses to ignore this responsibility then we need new ones.

Laws vary but without a doubt, no law in America either at the local, state or even in the quasi-union-government level of the Tennessee Valley Authority (TVA) will say, “One man gets to decide where and how $7.4M is spent.” I’m absolutely bewildered anyone could show such disrespect to his community to even pretend such a thing.

Finally, I am terribly troubled by something Basil included in his written statement, “our agreement is that the EPB will continue to follow the Model Procurement Act where they are prudent…” Can anyone think of a reason when following the law isn’t prudent?

It seems an entire two years’ worth of community struggle appears to be concluded as follows unless this board is replaced. The GEPB will keep the system they know isn’t working. They haven’t admitted not follow Kentucky law in the past, they intend to amend the open meetings law to fit their process for the future and promise to follow the Model Procurement Act when it is prudent.

If this council and mayor allows this board to continue with their refusal to accept their part and fix this situation, once and for all, then I fear mushrooms will not be the only thing growing in the dark here in Glasgow, Kentucky.