“We are grateful to Aetna for their generous donation in support of Kentucky’s fight against the opioid epidemic,” said Gov. Bevin. “We don’t have the luxury of pretending there isn’t a problem and Aetna is helping us address this issue head on. Every single life has value and is worth saving. It is up to all of us to work together and find real, long-lasting solutions.” 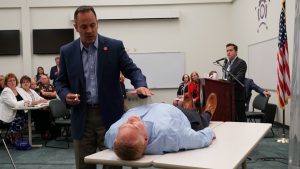 The kits, donated by Aetna, include two doses of nasal spray Narcan, also known as naloxone, and a pamphlet with directions on how to use it. When administered after an overdose, naloxone can counteract the life-threatening effects of opioid drugs and keep individuals who have overdosed alive until emergency medical help arrives.

“First responders are uniquely positioned to address the terrible effects of the opioid crisis—particularly in Kentucky, were overdose deaths increased significantly from 2015 to 2016,” said Hal L. Paz, M.D., M.S., Executive Vice President and Chief Medical Officer at Aetna. “Providing Narcan kits to first responders will save lives, granting those affected the opportunity to receive the long-term treatment and support they need.”

In 2016 in Kentucky, heroin was a factor in 456 fatal overdoses, and the opioid fentanyl contributed to 623 overdose deaths, according to the Kentucky Office of Drug Control Policy.

“Naloxone is an important safety tool for Kentucky’s law enforcement officers, helping to protect both the citizens and officers,” said Lynne M. Saddler, MD, MPH, District Director of Health for the Northern Kentucky Health Department. “Police are often the first on the scene of potential overdose, and can administer naloxone as a life-saving measure until EMS arrives. Further, police officers may be accidentally exposed to opioids through the course of their work. With powerful opioids like fentanyl circulating in our communities, this exposure could lead to potential overdose—with instance of this having been reported recently in nearby states. Naloxone can be a tool to protect officer safety.”

“Opioid addiction has devastated families throughout Boone, Northern Kentucky, and our Commonwealth,” said Rep. Wuchner. “And now, first responders are even at risk as they work to save lives every single day due to synthetic analogs and fentanyl. The first line of defense against additional overdose deaths is naloxone, which has fallen subject to shortages. I applaud Governor Bevin, Aetna, and law enforcement and health officials for partnering together to distribute this life-saving substance to first responders and continuing to fight the opioid crisis in Kentucky.”

Gov. Bevin also participated in a training demonstration today in Burlington, led by Dan Knecht, M.D., Head of Clinical Strategy for Health & Clinical Services at Aetna, on how to administer naloxone.

Kentucky launched a public awareness campaign in July 2017 highlighting the dangers of opioid misuse and abuse and offering information on drug treatment and naloxone. The campaign’s central message, “Don’t Let Them Die,” urges residents to help friends, family and communities overcome the crisis.