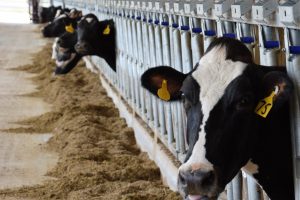 MALVERN HILLS DAIRY showcases a DeLaval robotic milking system, the first of its kind in Kentucky. Robotic equipment not only milk the cows, they also dispense fee, keep the barn free of manure, and help the Mattingly family work more efficiently.

Mattingly, like other farmers around the country, found that securing workers to help with the labor-intensive work of operating a Grade-A dairy was increasingly difficult.  Known for being a keen observer of trends in agriculture, Mattingly began exploring cutting-edge robotic technology as a means of operating his dairy.  Soon, Malvern Hills farm was deep in the planning stages of something Barren County – Kentucky’s Number One producer of dairy products – had never seen.

“This is really revolutionary,” Stephanie Mattingly, daughter of owners Richard and Sharon Mattingly, explained during tours of the facility last week.  Malvern Hills Dairy is a gleaming example of how technology is being put to work down on the farm in rural Kentucky.  In fact, one would have to go to areas such as Wisconsin or New York to see similar operations. 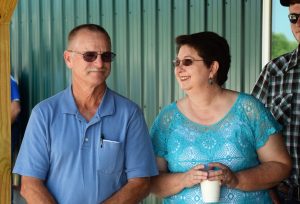 RICHARD AND SHARON MATTINGLY, owners of Malvern Hills Dairy in southern Barren County, welcomed the public into their state-of-the-art dairy with robotic equipment doing most of the work.

Mattingly chose to install a DeLaval system with added features that turned a basic robotic milking system into a bovine-centered wonderland that impresses the human visitors.  Worried about the muggy summer heat in the barn?  There’s tunnel-ventilated climate control that keeps a comfortable breeze flowing on even the hottest days.  How about feeding?  There’s a robotic feed pusher that dispenses it on cue.  Manure?  There’s a robotic manure pusher that keeps things tidy.  Wonder how much milk each cow produced during a milking?  The computerized system has it covered along with the ability to alert Mattingly that a cow may have a fever indicating she’s sick.  Like humans, cows have itches that need scratching and the set up includes a massage contraption that hits the spot.  Need a hoof trim?  There’s a hoof-trimming station where the veterinarian can easily take care of problem.  It seems DeLaval and the Mattinglys thought of nearly everything but that’s just where the cows are located. 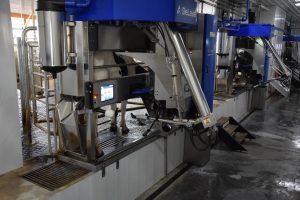 THREE ROBOTIC MILKING SYSTEMS perform the work of washing and preparing cows for milking, harvesting milk from each cow, and monitoring her food intake and more – all tasks that multiple workers normally perform in a traditional dairy operation.

In the operation’s office, monitors show live footage of what’s taking place in multiple areas of the barn. If you’d prefer to see the action in person, head up to an observation room with giant windows overlooking the entire operation for a bird’s-eye view.   A gymnasium-sized room holds enormous stainless-steel tanks that keep the milk perfectly-cooled until pick up for processing and eventual distribution to grocery stores. 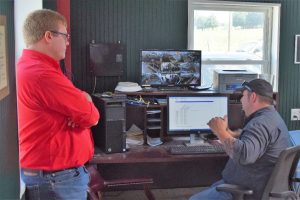 COWS ON CAMERA – the Malvern Hills Dairy office contains monitors showing activity in nine different areas of the milking operation, allowing Richard Mattingly a view of all aspects of the operation.

The computerized system constantly gathers data that Richard can access from a computer or, if he’s out and about, from his smartphone app, a concept he says is liberating.  “There’s three DeLaval robots that do the day-to-day work, so I’m focused on looking at the cows that need attention,” he explained.

Sharon Mattingly says the system helps the family produce top-quality milk, a task that demands constant attention.  “There’s a lot that goes into creating quality milk.  You’ve got to be clean, you’ve got to do everything just right, and that’s what the robots do.  They do that just right – every time.”

Malvern Hills Dairy is located in the Etoile community in southern Barren County.