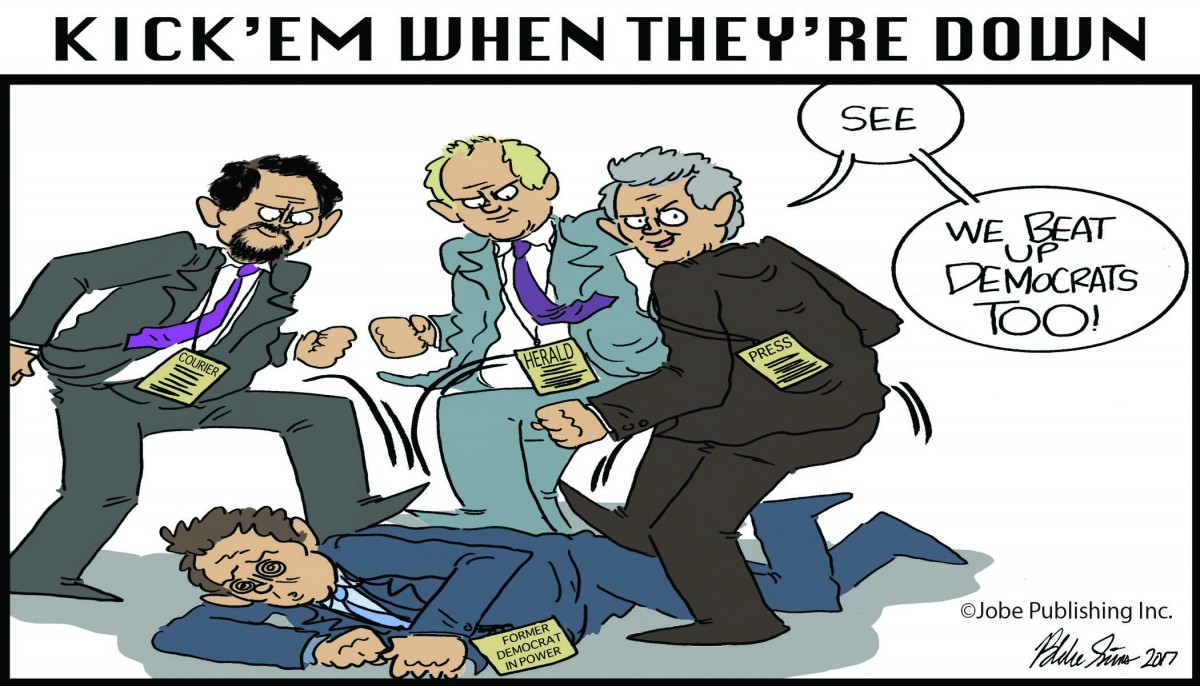 Over the years I’ve seen examples of deplorable news coverage but none dirtier than biased news and the “kick ‘em when they’re down” approaches.

The most obvious is the partisan biases seen against a person simply because of their political affiliation. Every politician experiences some bias but none compare with what President Donald Trump and Governor Matt Bevin have to deal with on a daily basis.

An example of what I believe constitutes biased news or “fake news” came to me this week from a blog shared by Al Cross, a former political writer for the Courier-Journal, antagonist to most state-wide Republicans and current Associate Extension Professor at the University of Kentucky School of Rural Journalism.

For the past few weeks, Cross has admittedly been trying to float the idea that Gov. Bevin is reaching outside a small group of individuals and going directly to community newspapers as an attempt to get the rural papers to gang up against the urban ones.

I have made my opposition to this idea known and did all I could to encourage individualism. I did this by suggesting others reach out to the governor and his staff, ask to interview them, ask the tough questions themselves and not be swayed by others with possible biased motives.

I am pleased to see several community editors meeting with the governor and I am confident that better and more accurate news is and will be the result.

Yet, this week Cross shared a column on his University of Kentucky Rural Journalism blog written by an individual from Bardstown who shares his conspiracy theory against the Courier-Journal, Lexington Herald-Leader, and CNHI newspapers by the governor.

Cross shared the commentary and even referenced the writer’s statement that only one editor in the Kentucky Press Association said they would run a column submitted by Blake Brickman, Gov. Bevin’s Chief of Staff, suggesting that all other editors said they would not.

This is a new low in biased reporting and if there has ever been an example of “fake news,” the Bardstown writer’s column is one as well as the commentary Cross provided along with it.

I immediately informed Cross that our newspapers ran it and within a few seconds found several others had as well.
I challenged the process and accuracy with Cross and as of my press time, his commentary remained but with an update stating it ran in daily newspapers in Owensboro and Bowling Green, and named a few others including the Frankfort State Journal, the Spencer Magnet, the Grayson County News Gazette, the Sentinel-Echo, and a special note which seems begrudgingly added, “Jeff Jobe, a Bevin ally, said his six Southern Kentucky papers ran it.”

Of course, updates are nice but because we have an Associate Professor at our largest public university promoting the theme as well as sharing poorly researched material, this “fake news” has already done the damage to Gov. Bevin as well as the Kentucky Press Association.

The kick them when they are down examples this week are ironic because they are both former Democrats in power. Such persons are easy targets for the liberal media. They like smacking these guys around because they are no longer of use to them and it allows them to showcase their impartiality of covering bad news even against Democrats.

Former State Representative Johnny Bell has a tough road ahead. Some of the stuff I have read is absolutely a disgrace to journalism. I sincerely hope he can pull himself together and move forward.

The second example from the past week is the sentencing of those associated with Timothy Longmeyer and others involved in his bribery and kickback schemes. The story has been justly reported but continuing to keep it alive through dramatic headlines and continual rehashing his personal contributions but somehow forgetting to reference his political bosses seem to be nothing more than kicking a guy when he is down.