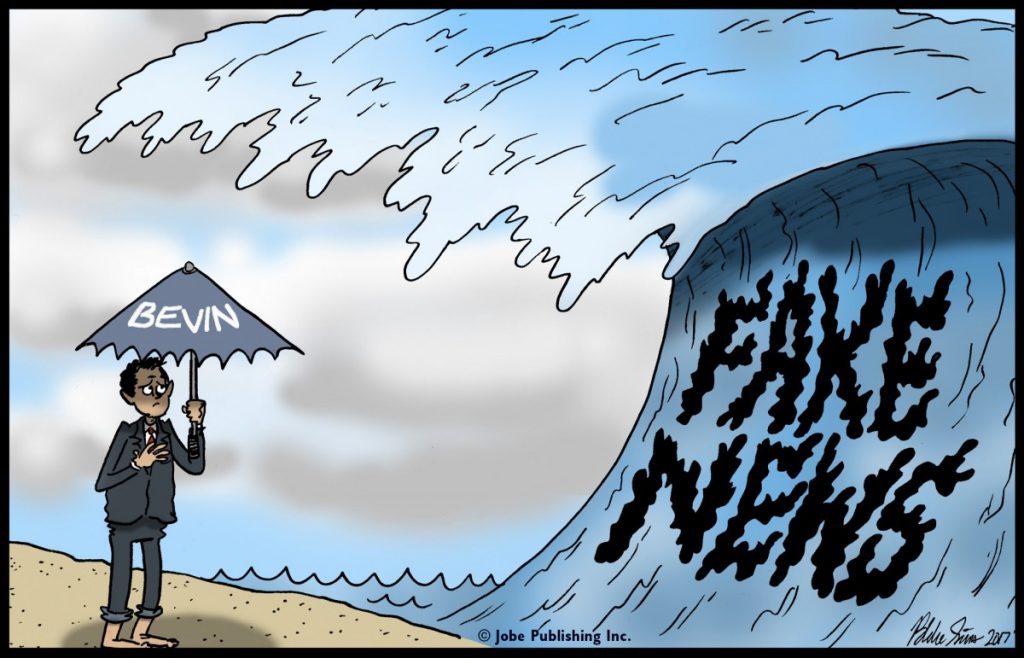 I seem to have a way of upsetting my liberal elitist journalism friends. Not because I think I am Zeus himself trying to over power Olympus (Kentucky), but simply because I call for balance and some degree of objectivity in news coverage.

It is so easy to slap a tag line along with your name declaring yourself the most trusted name in news; living up to it requires an honest look at yourself.

In today’s world of news coverage it seems the trend is to build a business model that puts in place an editorial viewpoint that can guarantee a large base of like-minded followers. Most times the biases are obvious and this is perfectly fine because we all know who is liberal and who is conservative.

My concern is piqued if, and only if, readers, listeners or viewers are being convinced to rely on one biased source and exclude other points of view or if the media source can’t distinguish the difference in news and opinion.
Wouldn’t you think this has something to do with why our country and state are so polarized? Wouldn’t it be equally justifiable to say this could be the foundation for why most of us are ignorant to truth on many issues?

Never have I asserted my opinions on every issue; I choose my battles and reserve my thoughts for issues I am prepared to defend with facts.

This has been a wonderful year for me personally with career growth and it seems my desire of just coasting into retirement isn’t going to happen as quickly as I once may have liked. Not because I don’t think I could handle a few years off because after almost 30 years of working for newspapers and moving in on my 20th year of ownership; I could do it and never look back. But honestly I feel I am at the peak in my career and have much to contribute.

Recently, I was asked to participate in the first-ever Skype White House Press Briefing and also to serve as a board member of the Kentucky Educational Television Authority.

What an honor it was to be chosen from thousands of news people to be one of the first four in history for the briefing and to have the trust of so many to sit on the governing board of such a valuable resource for all Kentuckians at KET.

Of course, there is a time-honored tradition with participating in the White House press briefing every bit as much as there is for sitting on this particular board and I want to honor them completely; yet when I asked those who chose me for these opportunities, “why me?” I was told because they trust me to do what is right and doing what I feel is right is what I will do.

Sadly, the critics of mine often subscribe to the theory that if you aren’t with us 100% then you are against us and this is not at all my position. I am all about balance and this is the only environment in which the best in us all will be represented.

I seem to get my colleagues very upset with my views; so much that I have literally been screamed at so much I’m comfortable I have DNA on my jacket from spit particles thrown my way.

Over the years I have found it isn’t the opinion writers who are left-of-center or right-of-center that get upset with me; it’s the ones who pretend to be able to leave opinions at the door when covering political news events or accepting new assignments where such opinions are a clear breach of ethics. You know the ones, they usually promote that they are independent and loyal to no party.

I believe it is absolutely impossible to be independent in today’s media world on all policies and this is a good thing. If we did, it would mean we removed our own personal passion from our work and passion must drive one in my industry because pay checks aren’t strong enough to do it on their own.

I once worked for a publisher who had been in the same position for 30 years and as I walked him to his car on his last day he said; “never think this job is about you and you will be just fine.” He explained it is about what we do, not who we are that attracts the masses and only if I can live long enough or accept the advice of an old man will I be protected from the disappointment. He added that because sooner or later, you can expect pain associated with losing fair weathered friends or watch as they walk past you to greet the new guy. I believed him then but it wasn’t until recently that I began experiencing the pain from losing a few fair weathered friends.

Without a doubt, today’s media has far too many people who think it is about them and their views instead of realizing it is about what we do that attracts the masses.

We all know it is true at the national level but what some may not realize is the biases are here in Kentucky as well.
Of course we want to make sure a sitting Governor doesn’t break any laws but to pontificate on something where no laws have been broken time and time again while giving minimal space for the next historically large corporate expansion because of long sought after policy on his watch is nothing more than biases and these guys are trying to create their own political tsunami.