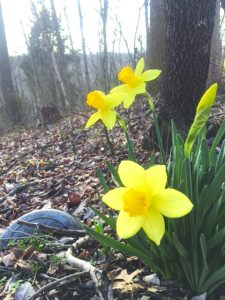 THE MOST COMMON, now in bloom across the region. 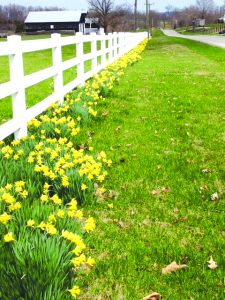 FROM READER LINDA FOX of Park City, passed down from her mother Austeel Stull. Narcissus pseudo-narcissus.

One of the hallmarks of spring in Kentucky is the array of daffodils, often called buttercups in these parts, which flood the hills and roadsides across the state.

Usually, they arrive with the March winds, but this year they were already bursting through the soil, and in blooming by mid-February.

For years I have admired their beauty and symbolism, but there has been one variety that stands out amongst the rest.

I first discovered it at the old home place of a distant grandmother’s some years ago.

Unlike most varieties, with flat petals and a prominent Perianth tube and pistils, the variety I discovered there looked more like a fluffy, and somewhat disorderly fluff of bright yellow petals all clustered together in one clump, with a few bright lime green petals amongst them.

The discovery of what I knew must have been an old heirloom variety, and certainly a hearty strain, prompted my interest.

My research revealed that it was a Van Sion daffodil – a flower with a fascinating story.

As it turns out, the Van Sion is significant in Appalachian heritage.

That’s not to say it originated here in America. It’s far older than that.

At least 4 centuries old, the Van Sion was so named because of a Flemish man who documented the rare blossom in the year 1620.

According to a written collection of historic flowers, entitled A Handbook of Narcissus, in 1934, Vincent Sion, a Fleming, living in London, cherished it in his garden for many years. He thought that John de Frauqueville might have given him the bulb, but that worthy disclaimed the honor, never having seen the like before.

Van Sion’s daffodil resembled no wild species at the time, and was said to have not bloomed for many years.

After it did begin blooming it did so for over a quarter century each spring. The Van Sion daffodils at my old family home sight have bloomed for at least fifty years, as I have black and white photos of them from the early 60s.

Before his death Van Sion gave bulbs to George Wilmer of Stratford Bowe, who came to call it Wilmer’s Double Daffodil, but the name didn’t stick here in America.

By the 1700s, the unique-faced flower had spread throughout a good portion of Northern Europe.

The flower, so hearty that it can propagate with ease, and is easily transplantable, even when the bulbs must lay dormant for long periods of time, became a popular item for English, Irish and Scottish immigrants who came to America.

It was a means for them to preserve something sentimental of their heritage, particularly considering that the flower often grew wild around their houses and graves of loved ones.

At the same time that it made its way to America it was also apparently making its way to other parts of the globe.

Botanists’ records of the flower have been found, from the 1700s and 1800s as far east as New Zealand as well as along the Spanish Riviera and in Portugal.

In America, immigrants planted it in the places they first settled, particularly the hills of Appalachia.

Even today with those first settlers’ hillside dwellings gone, you can often find the location of old homes by looking for the long-blooming Van Sion in the Virginias, Kentucky, Tennessee and Carolinas.

Their beauty did not go un-noted.

They soon became a favorite flower amongst the Native Americans who remained in the hills, and were carried with some of the Cherokee who traveled the Trail of Tears, accounting for their prolific growth in modern day Oklahoma.

Although it is nearly impossible to find this old breed of daffodil in a catalog or nursery, it is prolific in all states east of the Mississippi and a few to the west.

Other common varieties that grow prolifically in South Central Kentucky are Narcissus pseudo narcissus, the most common yellow on yellow and yellow on white variety, and the miniature variety the Narcissus jonquilla is a bulbous flowering plant that was native to Spain.

So, this spring as you admire the many sorts of daffodils that adorn our state, keep in mind that each has its own story and own origin; And keep an eye out for the frilly green and yellow petaled Van Sion, and remember its story of strength and perseverance through many cultures and centuries. 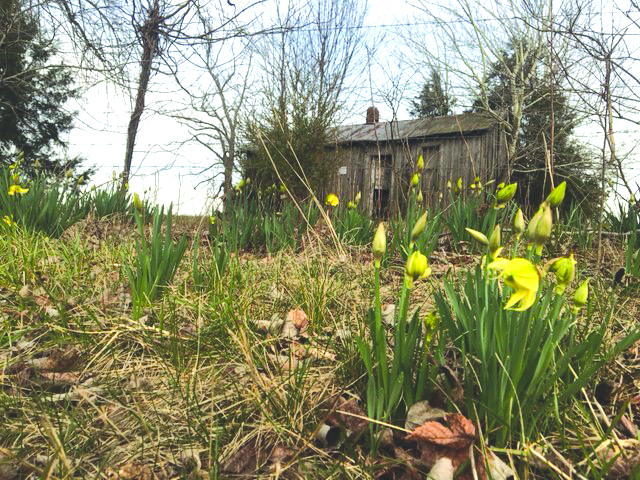 THE VAN SION still in bloom this spring at the old home place near the Monroe-Barren-Metcalfe junction.